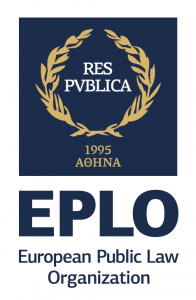 The EPLO – www.eplo.eu – is an international organization based in Athens, Greece, whose mission is the creation and dissemination of knowledge in the area of public law lato sensu, including inter alia national, comparative and European public law, human rights law, environmental law, etc., and the promotion of European values through public law throughout the world. To this effect, the Organization organizes and supports technical cooperation, scientific research, education & training institution building scientific publications and events. In its over 20 years of existence, the EPLO has completed over 200 projects of all volumes with regard to justice, criminal law, democracy, institution building, public administration reform – also including civil service reform – in Europe, the Mediterranean Countries, the Balkan Area, the Caucasus and Former Soviet States, the Middle East, Asia and in Africa.

To date, Greece, Italy, Cyprus, Albania, France, Estonia, Serbia, Moldova, Azerbaijan, Armenia, Ukraine, Georgia, Romania and Bosnia and Herzegovina, the Republic of Albania and Hungary, 4 public authorities as well as 64 Universities and Institutions from 33 countries are members of the EPLO. Recognizing the added value of the EPLO’s activities in Europe, the European Commission and the Council of Europe are represented in the Board of Directors. The EPLO’s Scientific Council is constituted by the European Group of Public Law (EGPL), which includes 234 leading European judges, jurists, law academics and practitioners in the field of public law.

The EPLO is also a nationally Mandated Body of the Hellenic Republic for implementing European Union Twinning projects. Such projects assist EU candidate countries and countries of the European Neighborhood Policy in the development of modern and efficient public administrations, with the structures, human resources and management skills needed to implement the acquis communautaire to the same standards as the Member States. To date, the EPLO has executed 36 Twinning Projects in numerous countries and sectors, including: public administration, regulatory and legislative reforms, customs and taxation, law enforcement, intellectual property rights, border management, environment and agriculture.

The EPLO maintains 3 branch offices in Armenia, Moldova and Romania, in addition to the 8 regional offices in Bosnia and Herzegovina, Belgium, Nicaragua, Ukraine, Mexico, Iran and Slovakia. These regional offices support the EPLO’s headquarters in its constant effort to disseminate knowledge in the area of public law and to support European values.

The Center for Continuing Education at the Law Faculty of Sofia University (CCE) was established in 2004 by several professors from the Faculty of Law. Its main purpose is to organise different programs for training of national jurists. The Centre administrates the International Master Program “EU Law”, organized jointly with University of Lorraine and in partnership with the universities in Strasbourg, Brussels and Luxembourg. Every year the CCE organizes an International Summer School of European Law and a Winter European Law Academy. During the period from 2004 to 2014, within those programs, over 600 people were trained, including judges of the Supreme Courts (SAC, SCC), regional and district judges, prosecutors, lawyers, notaries, public employees and others.

In 2013-2014, the Centre has been choose as an executor of part «Education» of a project № 12-24-1/01.08.2013, the “Competent judicial system and effective management of human resources in the Administrative Court – Pleven and Administrative Court – Gabrovo”, Operational Programme “Administrative Capacity”, co-financed by the EU by the European Social Fund. In 2014 the CCE became a partner of the Sofia Bar Association in organizing a joint project for continuous training of lawyers in the field of EU law.

To implement its tasks the Centre attracted as speakers a number of distinguished scholars from home and abroad, including prof. Jean-Paul Jacque (Honorary Director of Juridical service by the Council of the UE), prof. Dominique Ritleng (Referendaire at the Court of Justice of EU – Luxembourg), Acad. prof. Marianne Dony (Director of Institut d’études européennes), prof. Florence Benoit-Rohmer (Secretary general of the European Inter-University Center for Democracy and Human rights), prof. Constance Grewe (University of Strasbourg, Judge at the Constitutional court of Bosnia and Herzegovina), Prof. Joël Rideau (Nice) and others. Besides representatives of the doctrine among the speakers are always present recognized representatives of the practice – in the matter of competition law and the substantive law of the EU as a guest speakers we can mention Dr. Ekaterina Rousseva and Helena Penovski (from DG “Competition”), Kiril Pangelov ( The Commission for protection of the Competition) and others.

Together with its educational activities, the Center develops an extensive research program in almost all areas of EU law. Evidence of those activities are over 20 publications (books, collections, lectures, etc.) issued during the period of existence of the Center in the Series “Studies in European Union law. 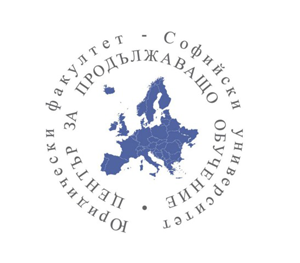 Associate partners to the project are:

We're not around right now. But you can send us an email and we'll get back to you, asap.